With more than 25 kilometres of roads and trails, Parc Jean-Drapeau provides an outdoor escape in the heart of nature, just a few steps from downtown Montréal.

Whether it's on the shores of the water, on Mont Boullé near the Tour de Lévis, along the stream near the Poudrière, in the Floralies gardens, or on Circuit Gilles-Villeneuve, the Parc is an enjoyable place for hiking. It becomes "the" place to be for nature and photography enthusiasts.

The Parc is reborn in the spring with the melting of snow, budding and flowering tulips and daffodils and maple season. It's the return of migratory birds and animals that hibernated... Moreover, it is not uncommon to see a groundhog sneak into the trails!

In the summer, the Parc is busy! There are a multitude of activities to do with family or friends. Add to your walk a picnic in the sun or in the shade under the trees and that's a nice way to enjoy your visit on the shore of the Saint Lawrence River!

We must take advantage of all the autumnal beauty nature offers us. Warm, bright colors ignite the Parc while the animals make their provisions for the cold season.

Winter creates an enchanting and magical environment. Contemplate the beautiful landscape which will melt your heart. Walk alongside the Saint Lawrence River and watch the sometimes frozen, sometimes high flow water and enjoy the tranquility while breathing fresh air.

A Trail Through the Islands 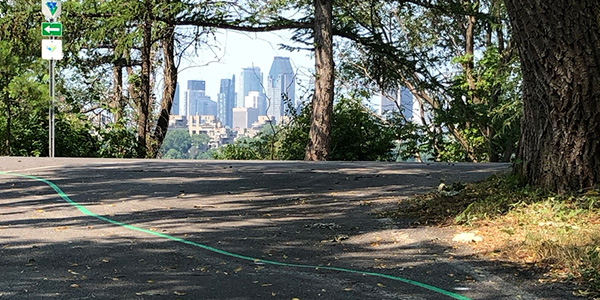 Follow this pedestrian path to find out all about public art, Expo 67 pavilions and iconic sites of Parc Jean-Drapeau.

Parc Jean-Drapeau, in collaboration with the Stewart Museum and the Biosphere, Environment Museum, has a fun and educational new tool for budding adventurers.

The travelogue will lead you under the trees and on the winding paths of Mont Boullé. A treasure-trove of information and entertaining quizzes will enable you to discover or rediscover the Lévis Tower, the Powderhouse, the fort on Île Sainte-Hélène and, of course, the Biosphere and Stewart Museum.

Discover the 25 photos of the album!

Getting to île Notre-Dame

The Jean-Drapeau subway station is located in the heart of Parc Jean-Drapeau. To get to the Parc easily and quickly, the subway is still the best way to go!

767: During the summer season, the 767 shuttle stops at Jean-Doré Beach and the La Ronde amusement park.

777: Every day of the year, the 777 shuttle provides fast access to the Casino de Montréal.

BIXI : there are many BIXI stations at the Parc during the summer season.

For more details, visit Getting to the Parc.