The Moai head at Parc Jean-Drapeau is a life-size replica of the head of an original Moai statue found on Easter Island.

The art piece, done by the Lippincott company, which was once known for making and installing public art works, is one of the 100 mould reproductions made from an original head displayed in New York in 1968 to raise public awareness and block any commercial development on Easter Island. The island's cultural heritage was not protected by UNESCO at that time.

The Moai head was acquired by the City of Montréal in 1973 from The International Fund for Monuments, which loaned it for the Le monde de l'insolite exhibit shown at Man and His World. 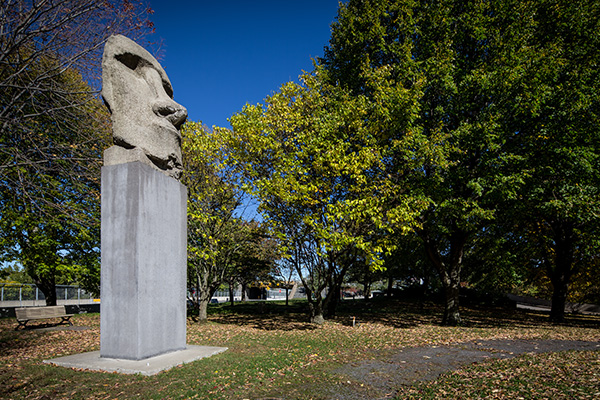 To obtain more details concerning Public Art or for any request for information, do not hesitate to contact us.

Getting to the artwork

To make it easier to get around, here is the exact location of the artwork at Parc Jean-Drapeau posted on Google Maps.

The Jean-Drapeau subway station is located on Île Sainte-Hélène, in the heart of Parc Jean-Drapeau. To get to the Parc easily and quickly, the subway is still the best way to go!

During the summer season, the 767 shuttle stops at Jean-Doré Beach and the La Ronde amusement park.

Every day of the year, the 777 shuttle provides fast access to the Casino de Montréal.

There are many BIXI stations at the Parc during the summer season.

Rates and other parking areas

You can reserve a taxi for your travels at the Parc by using a valid STM transport fare (ticket or OPUS card).