Parc Jean-Drapeau's rock climbing wall is a little-known and unique place in Montréal where you can do rock climbing outdoors. Climbers can do bouldering or top-rope climbing, as well practise movements and techniques such as positioning your hands and feet, traversing , rappelling, etc.

The reddish brown, 100-metre long and 8-to-12 metre high rock climbing wall is the result of previous excavations that have occurred and for which the stones have been used as construction material for the various buildings at the Parc (Lévis Tower, Aquatic Complex, Hélène de Champlain, etc.).

To enhance your safety, it is recommended you have someone with you and bring along a crash pad. The rock climbing wall facility is exclusively managed by the Fédération québécoise de la montagne et de l'escalade (FQME). 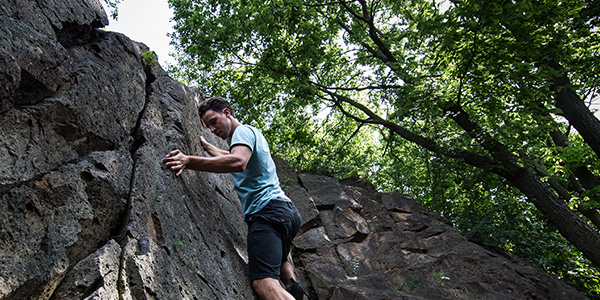 Covid-19 Given the current context, we are forced to move the official opening date of the climbing wall.
Visit our website or follow us on social media to stay informed of developments.

Access is reserved and free for members of the FQME. You can obtain a yearly or daily membership.

Getting to Rock climbing wall

The Jean-Drapeau subway station is located in the heart of Parc Jean-Drapeau. To get to the Parc easily and quickly, the subway is still the best way to go!

767: During the summer season, the 767 shuttle stops at Jean-Doré Beach and the La Ronde amusement park.

777: Every day of the year, the 777 shuttle provides fast access to the Casino de Montréal.

BIXI : there are many BIXI stations at the Parc during the summer season.

Rates and other parking areas

For more details, visit Getting to the Parc.