There are currently no notices regarding mobility or facilities at Parc Jean-Drapeau.

Presentation of the Parc and physical diagnosis

This chapter provides a detailed profile of the historical evolution of Parc Jean-Drapeau. The product of many design phases which have shaped, modified and changed its land by bequeathing a broad patrimonial diversity, the Parc is unique in its kind and abundant in natural and built aspects.


The diagnostics of the Parc indicate an inventory comprising:

35 landscape units that have been cut-up to define the subsets marked by their uniformity or specificities (spatial organization, vegetation, topography, built heritage, etc.);

53 buildings and built art works, including bridges and walkways;

Parc Jean-Drapeau is the product of many design and development phases that have shaped, modified and changed its land by bequeathing a broad patrimonial diversity.

Parc Jean-Drapeau is Montréal's largest major park in area. It is part of the Hochelaga archipelago, comprised of a total of 320 islands and islets at the confluence of the Saint Lawrence and Outaouais River.


From the 13th century to today

Indigenous occupation of île Sainte-Hélène by the Saint Lawrence Iroquoians.

Under the French regime, île Sainte-Hélène is annexed to the Longueuil seigneury as a manor and farm equipment are built there.

Ahead of an American invasion, the British purchase île Sainte-Hélène for the purpose of fortifying it and making it a military supply centre for the entire colony.

The City of Montréal receives permission to use the southeast part of île Sainte-Hélène as a public park. This becomes the city's first major large public park.

The Havre Bridge (now the Jacques-Cartier Bridge) is opened and provides drivable access to île Sainte-Hélène for the first time.

After the Second World War, the American firm McFadzean, Everly & Associates designs an overall plan to complete the layout of the park on île Sainte-Hélène.

The overall plans of Montréal's International and Universal Exposition foresees the expanding of the original île Sainte-Hélène and the creation of île Notre-Dame. Expo 67 would be a signature event for Montréal, Québec and Canada.

The Man and His World exposition extends the spirit of Expo 67 on the islands.

Montréal plays host to the Olympic Games and the Olympic Basin, on île Notre-Dame, is the site for the rowing and canoe-kayaking competitions.

The Formula 1 circuit on île Notre-Dame is opened and the Canadian Grand Prix is held in Montréal for the first time.

The park-beach (now the Jean-Doré Beach) is built and partial implementation of the Management Plan for the promotion and development of Parc des Îles.

Start of the growth of event entertainment on Sainte-Hélène and Notre-Dame islands.

Construction of a new Formula 1 paddock and an outdoor amphitheatre with a seating capacity of 65,000 people on the south point of île Sainte-Hélène.

While the major part of the Parc's land stems from facilities built by Man, there are ecosystems which were installed and developed dating to Expo 67, which saw île Notre-Dame emerge from the river waters and île Sainte-Hélène gain some more space. 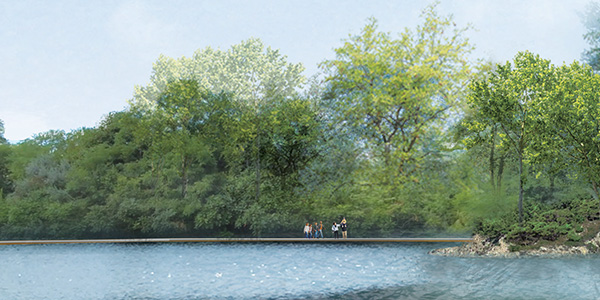 The presence of water is an asset that is part of the Parc's distinctive character. Some of the wetlands are ecosystems which flourish with wildlife and plant-life. The bodies of water also provide visual openings and long-distance views. The omnipresent water offers a unique innovation potential and a recourse to the leading practices for optimal management of the bodies of water.

Did you know that all these water extensions represent 15% of the total surface of the two islands? 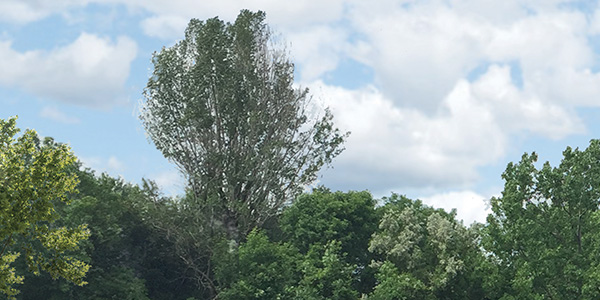 On the islands, which were mostly built, the development of natural eco-systems has contributed to the current identity of the Parc, which, over time, has been enriched by an increasing abundance of nature. This nature offers great potential to showcase the wildlife and vegetation strata. 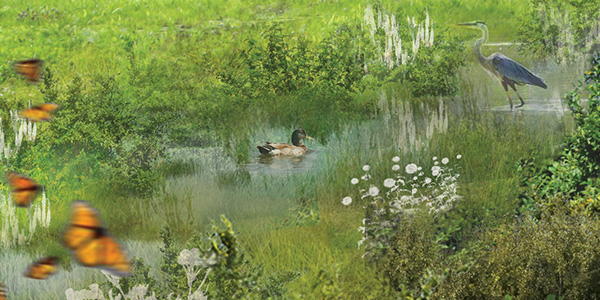 Wildlife on the two islands is highly diversified: it includes birds, fish, mammals, insects, amphibians, etc. But this aspect of the Parc is largely unknown because there are currently very few observation devices, hence the under-exploited interest users might have for wildlife viewing.

Parc Jean-Drapeau is renowned for the variety of its offering of recreational, sports and cultural activities on the two islands. The event vocation is part of its history, where gatherings of all types have been held every year.

During the summer season, users have access to a wide range of sports equipment, the park-beach and many cultural and heritage places.

The winter offering is somewhat limited, but the Fête des neiges de Montréal puts on an array of activities spanning many weekends. The two museums (Stewart Museum and the Biosphere, Environment Museum) are open and the Casino de Montréal attracts a high volume of Parc visitors.

This offer is complemented by several rental spaces that are available for special occasions. 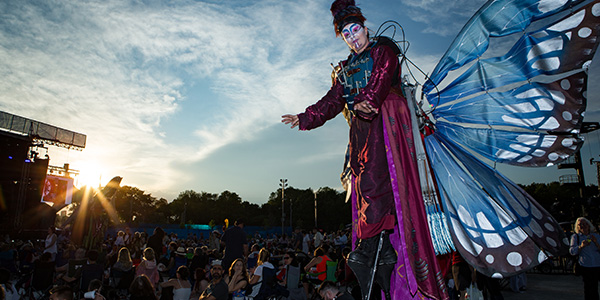 What you need to know:

In addition to proposing a great variety of activities and permanent uses of a cultural, sports and recreational vocation, Parc Jean-Drapeau offers rental services and the potential to offer much more.

Parc Jean-Drapeau's event programming is well-rounded and highly diversified during the summer season, which generates a considerable crowd following. But the number and magnitude of the public activities has reached a critical threshold which is jeopardizing the Parc's vitality, making it necessary to strike a certain balance.

The presence of many neglected spaces (limited programming, minimally developed, residual character or vacant) breaks the continuity between the Parc's various facilities. But these spaces have a great potential as a linkage to Parc Jean-Drapeau's many landscapes.

Parc Jean-Drapeau's insularity makes it a unique destination: in fact, getting there requires resorting to very specific means of transportation.

But once they are on site, citizens have little access, mobility-wise, to discover the Parc's spacious territory and lush landscape.

The Parc is teeming with treasures, but then again users need to be informed, guided and encouraged to come and see them... 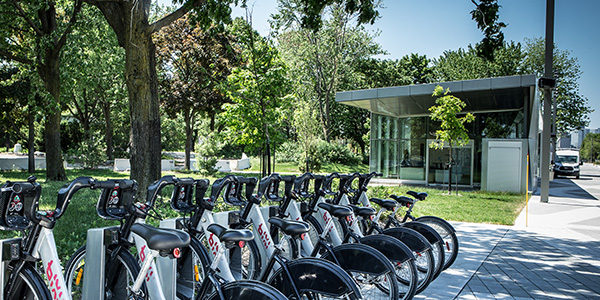 To get to the Parc, visitors must travel some distance from the island of Montréal or the South Shore, and they can do so by car, subway, bus, bike and the river shuttle in the summer months. Being able to use various means of transportation has the potential of further enhancing the experience of these trips to the Parc.

Parc Jean-Drapeau's spaciousness opens myriad possibilities in terms of mobility experiences as visitors wend their way through the islands. Currently travelled on foot, bike, by car or bus, going from one island to the other using bridges, the site impresses people more and more as they go along.

Parc Jean-Drapeau offers the possibility of enjoying a fascinating array of experiences, a fact which is sometimes overlooked because of occasional accessing problems or the under-exploiting of some of the places. Still, these experiences present enormous potential in promoting the Parc.