News Stay on top of the latest news →

Schedule and rates of the Aquatic Complex

Previously named the Chalet des Baigneurs, then the Pavillon des Baigneurs, Parc Jean-Drapeau's Aquatic Complex has had various vocations over the years. At one time, officials even planned to establish a beach in the Saint Lawrence River!

Here are some of the highlights in the building of the Aquatic Complex.

The provincial government wants to address the unemployment situation. Restoration work begins on Île Sainte-Hélène. More than 100 men are hired to build the Tour de Lévis, the Hélène-de-Champlain restaurant and the Chalet des Baigneurs.

The Chalet des Baigneurs is to be built to serve a beach bordering Île Sainte-Hélène, but this work is put aside while the Second World War is on. And, during this time span, the public was not allowed to go on the island.

Resumption of the restoration work - the new development plans include outdoor swimming pools, and the beach project is abandoned.

The pools are opened to the public on June 20. Admission to the Aquatic Complex costs 35 cents for adults and 20 cents for children. 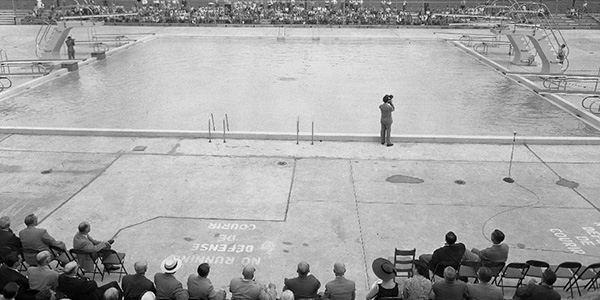 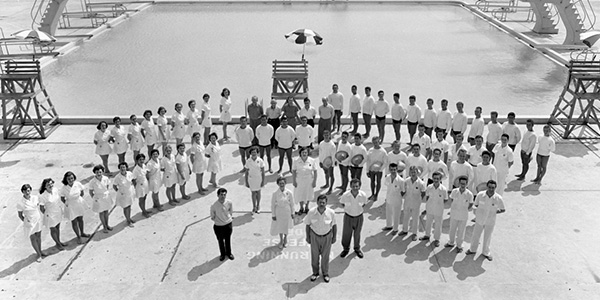 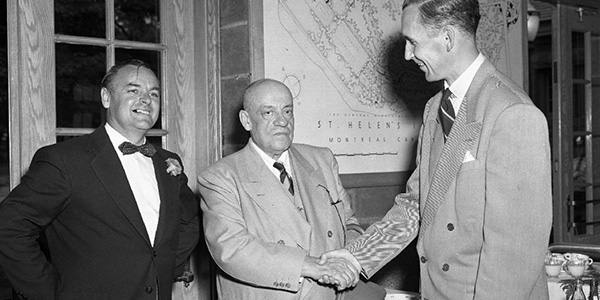 While Expo 67 is being held, the public is not allowed to use the pools. The Pavillon des Baigneurs serves as a nursery and locker rooms for the world's fair hostesses are installed.

Building of new pools and restoration of the Pavillon des Baigneurs after being awarded the 11th FINA World Championships. The quality of these facilities perfectly meets the Olympic-calibre requirements demanded by the governing body, FINA.

Montréal plays host to the 11th FINA World Championships in 2005. Eight world records in the swimming competition are shattered in the Montréal pools. The Pavillon des Baigneurs is renamed the Aquatic Complex.

From July 27 to August 10, close to 10,000 athletes over the age of 25, from 60 countries, compete in the 15th FINA World Masters Championships in open water and synchronized swimming, and swimming, diving and water polo at Parc Jean-Drapeau.